When John Perry arrived at Cockatoo Island in 1852, he was the bare knuckle champion prize fighter of the colony. He was six feet one inches tall and weighed 80 kilograms. Perry was born in Dublin, was of African Caribbean descent, and had established a reputation as a pugilist in Britain and for his feats in pedestrianism, which was a form of competitive walking, popular in the nineteenth century.

Perry was known professionally as ‘Perry the Black’ and, in England, as ‘John Parry’. In the wake of a month spent walking Ripon, England (he clocked up a thousand hours), Perry married. Sadly, a year later, he was widowed. Perry subsequently moved to London, where he made a name for himself as a prize fighter. He then travelled across Britain, demonstrating his boxing prowess and, later, bought a business with his winnings.

Perry’s fortunes weren’t to last… He again found love, and was planning to marry, when he was brought up on forgery charges. He had changed money with a friend so he could buy a wedding suit but the notes used to pay for the tailor were forged. At the subsequent trial, Perry testified that he was illiterate and could not recognise the forgery. Perry was found guilty and given a seven year sentence after Perry’s friend testified that he had been duped too. There was speculation that Perry had been framed as England was not prepared for a black boxing champion.

Perry spent eighteen months in Pentonville Gaol, where he was deemed to be a model prisoner and transported under a scheme where he would receive a pardon, as long as he never returned to England. Perry arrived in Geelong in 1849 and worked as a servant for a number of months and then moved to Sydney and met up with Bill Davis who became his friend and boxing promotor. Perry’s illiteracy seemed to have miraculously disappeared as he was writing sporting articles for journals. Perry’s first fight was held in Sydney in 1849, promoted by Bill Davis, and soon he was considered the prize fighting champion of the colony.

As well as fighting, Perry also gave boxing lessons, but soon moved to Ipswich to work as a publican with a new wife. All was going well until a shepherd who was staying at Perry’s hotel woke from a heavy drinking session to discover that his pay cheque was missing from his horse’s saddlebag. The shepherd accused Perry of stealing the cheque and they became embroiled in a physical altercation. Perry was charged with assault and later with larceny when, a month later, he presented the cheque to a storekeeper. Perry was tried for larceny by Chief Justice Sir Alfred Stephen, found guilty and sentenced to six years hard labour at Cockatoo Island.

Ironically, Perry travelled to Sydney for his imprisonment on the same boat as Chief Justice Stephen. The boat sailed through violent storms and Perry was brought up on deck to assist the sailors. Perry was credited with saving the crew and passengers when strong winds nearly overturned the ship. The Governor, Sir Charles Fitzroy was impressed by Perry’s actions and a year was taken off his sentence, much to the objection of the Chief Justice.

On Cockatoo Island, Perry’s arrival as a prize fighter was welcomed. Prize fights were illegally staged and sanctioned on the Island by the superintendent and the officers. Perry was excused from hard labour, allowed to train and given jobs that were usually assigned for unfit or sick convicts. Perry also trained the superintendent of the Island’s son in boxing. In 1857, Perry was released after serving five years.

After his release form the Island, Perry toured the colony, displaying his boxing prowess. His reputation, however began to suffer, and soon he was drinking heavily and often charged with vagrancy. He opened up a boxing school but ten years after his release from Cockatoo Island, he was found in a drunken state near York and King Street, and was admitted to the infirmary, where he died soon afterwards. A post mortem examination found that he died from congestion of the brain, which was produced by ’long-continued intemperance’. Perry was 47 years old. 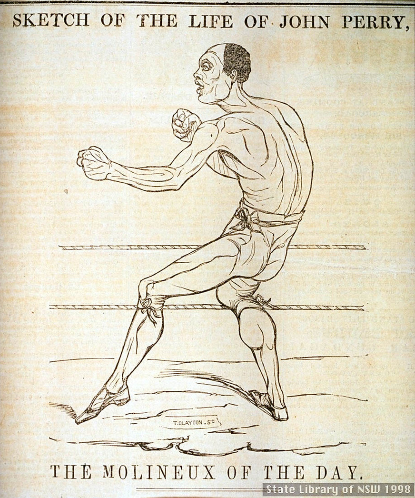 Perry is credited with saving the crew and passengers of the ship transporting him to Sydney for imprisonment.