Jack and Tom Miles were born in New Zealand and grew up in the Canterbury district, sons of a sheep farmer. The family was a very large one of 11 children, so they both left the land to pursue other occupations. Jack was a saddle maker, 24 years of age, and Tom a labourer, 29 years of age, when World War I broke out. The two brothers were on holiday in Sydney and they joined up together, enlisting in the second Battalion AIF. Their regimental numbers were 529 and 530 respectively. Neither was married at enlistment and both gave their mother, at an address in Christchurch, as their next of kin. Both were listed as Church of England denomination.

Jack had no previous military experience, while Tom had served in a New Zealand militia. A photograph survives of him in that uniform. They sailed from Sydney to Western Australia, and from there to Egypt where they remained for some time in training and preparation. A postcard, written by Jack to their older brother Will (my great-grandfather), survives. Jack complains of the ubiquitous sand and describes things as "pretty fair" (classic Aussie-style understatement)!

The second Battalion sailed from Egypt to Gallipoli on 4th April and was hotly engaged in action from the first landings on 25th April. Tom and Jack both disappeared sometime after 2 May 1915, their fates unknown. No trace of them has ever been found. The battalion had advanced to a new position on that day. A Red Cross inquiry after the war investigated their disappearances, along with those of many other missing Anzac soldiers. Casualties were so high that eyewitnesses were difficult to find. One witness remembered the two brothers and said that he never saw them again after 2 May. Another said that they disappeared during heavy shelling. The history of the second Battalion records heavy shelling early in May. 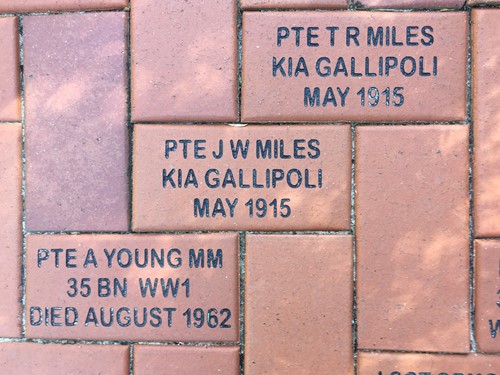 Sadly, nothing more is known. The names of the two brothers are inscribed on the Australian Memorial Walk at North Head sanctuary, along with many others, as well as at the Lone Pine Cemetery at Gallipoli. Another paver (also pictured) is dedicated to my paternal grandfather, Andy Young. Andy was only a young boy when Jack and Tom Miles, his uncles, enlisted and he never really knew them. Nevertheless, he had many details of their life and service passed on to him by his father (Will, their older brother), and he passed these onto his wife and sons. Photographs, a service medal, a postcard and one or two other items have been retained in family archives.