5 min read
Harbour Trust / Our story / Harbour History / DigiTales / Mary Gould: Eight years a boy
...  / DigiTales / Mary Gould: Eight years a boy
In 1879, James Gould – a teenaged orphan from Central West NSW – was arrested for vagrancy and sentenced to Cockatoo Island for education aboard the Vernon, a nautical school ship for boys. According to volunteer researcher Michele Harper, the sentence exposed a secret James had kept for eight years; namely, the youth was a girl who had spent years disguised as a boy…

The arrest and the revelation

At the time that Gould was arrested in Central West NSW and sent to the Vernon, the youth was roughly 14 or 15 years old. Following their arrest, Gould – who presented to authorities as a boy named James – was transported to Sydney and spent a night in the custody of the water police before being sent to the Vernon. Upon arriving at the Vernon, Gould was put under the charge of the boatswain for a bath, haircut, and what was termed ‘general purification’.

Gould refused the direction to undress, however, and was referred by the boatswain to the Captain of the Vernon, Frederick Neitenstein. When the weeping youth continued to protest the direction, Captain Neitenstein threatened punishment. At this point, the youth revealed they were in fact a girl and gave their name as Jem.

A mother’s dying wish and a promise

Captain Neitenstein learned Gould’s mother had died eight years earlier at Grenfell, and on her deathbed, made her daughter promise to disguise as a boy. The mother reasoned that Gould would be safer from harm, and more likely to earn a living, if she lived as a boy.  So, where was Gould’s father? It is understood that he was working on the Goldfields at the time of his wife’s passing and that he, himself, died 12 months later.

Following her mother’s death, Gould said she walked from Grenfell to Lambing Flat and spent a couple of years working as a shepherd in exchange for food and shelter before finding employment with publican, undertaking chores. When the publican sold the business, Gould said she found work harder to come by and it was during this period that she was arrested for vagrancy. By this point, Gould had spent eight years as a boy.

Hearing Gould’s story, Captain Neitenstein concluded the youth, for all her experience, was an innocent and interesting girl. He also observed that Gould was a strong and tanned due to her outdoor life.

Subsequently, Gould was transferred form the Vernon to Cockatoo Island’s Biloela Reformatory, where she came under the charge of Mrs Walker while politician and future NSW premier Sir Henry Parkes considered her case.

At Biloela, Gould revealed she had frequently been called Charley growing up. At this point, the youth variously known as James, Jem, and Charley was rechristened Charlotte and moved to the Biloela Industrial school for Girls, located alongside Biloela Reformatory.

The secret life of Mary

In one more twist, Mrs Walker of the Biloela Reformatory was contacted by a policeman, known as Constable Murphy, who had seen an article on Gould in the newspapers. Having known Gould personally, he said he could shed some light on the youth’s story and true identity.

Constable Murphy revealed Gould’s true name was not James, Jem, Charley, or Charlotte but Mary. Consistent with what Captain Neitenstein had learned, Gould’s mother and father had died eight and nine years earlier. Once orphaned, however, Gould and her four siblings were taken in by local families.  This included the Kenny family in Moppity, near Young. When Gould was caught stealing from the Kenny family, around two and a half years later, they relinquished their guardianship of the youth.

Not much is known about the time Mary Gould – aka James, Jem, Charley, and Charlotte – spent at the Biloela Industrial School for Girls. However, it was usual for youths to be detained at the institution for at least 12 months, before entering employment as a domestic servant (still under the watchful eye of the Biloela authorities) until they reached adulthood.

A newspaper article dated 14 July 1883 reported that Gould – having recently left Biloela – was convicted of stealing belongings, valued at £30, from a lodger at the house where she was a domestic servant. The spoils? Two gold rings, an amethyst brooch, one handkerchief and a blue necktie. For this crime, Gould was sentenced to six months imprisonment with hard labour.

In the warrant for her arrest, Gould was described as being “about 17 years of age, tall and slender build, brown hair, cut short, regular features, good looking; dressed in light dress, tweed jacket, and hat trimmed with white cream, white feather and red ribbon”. 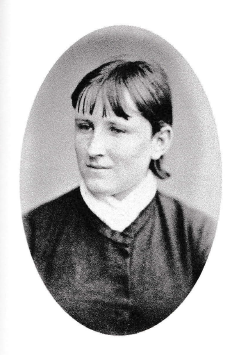 It was only when punishment was threatened that Gould revealed that he was actually a girl, known as Jem.

The Convict Era of Cockatoo Island