It was a very ordinary day, weather-wise, on Cockatoo Island. I was doing a tour for a group of school girls, aged 11 and 12. Normally, I would conclude the tour on the front lawn of Biloela House but on this day, I ushered the students and their teachers into Biloela House to escape the weather.

The students were sitting on the floor. The girl to my right had her left arm extended out and was leaning on it. Next thing, she withdrew her right hand, startled, and looked to her left. After the tour, a teacher approached me with the girl in tow and asked her to tell me what had happened. She told me 'someone' had smacked her hand quite hard… but there had been no one besides her.

In September 2018, a group of year 3 and 4 students joined me for a tour. During a break in the tour, two teachers approached me and asked – very awkwardly and somewhat embarrassed – if there were ever ‘strange’ occurrences on the island. They were relieved when I replied, “Do you mean… is it haunted? Absolutely, it is!”

The teachers then revealed the story of a school camping trip to the island, two years earlier. They said two students, both girls, claimed they couldn’t sleep because a little girl, aged 5 or 6, kept coming into their tent. The girl was dressed in a white dress and had wanted the students, who’d been sharing a tent, to come outside and play. When the teachers asked at the Visitors Centre who else was staying on the island… they were told they were the only ones there that night.

Another tour guide, let’s call her ‘Vicki’, was doing a birthday tour for a group of kids, aged 10 and 11. On the lawn of Biloela House, a girl told Vicki there was a little girl in a white dress looking at her from the window.

So... who is this little girl? Mary Caroline Mann, affectionately known as Minnie, was the second child of Gother Kerr Mann, Superintendent of Cockatoo Island from 1859 to 1870. Minnie and her eleven siblings moved to Biloela House from their family home in Greenwich in 1864 and lived there until Gother retired in 1870. Minnie loved her time living on Cockatoo Island and wrote about her experiences in her diary. She loved the island so much... that she has decided to remain there.

Minnie’s presence has been detected by paranormal groups in the north east room of Biloela House, otherwise known as the wallpaper room. From what I've gathered, she enjoys interacting with other girls. So, next time you are in Biloela House, say ‘hello’ to Minnie. And do not be upset or concerned if you feel your hair being pulled or your hand being playfully smacked… it’s just Minnie letting you know she is there. Oh, before I forget: Someone, who was on the Ghostyard Tour in October 2018, took this photo at Biloela House... Do you seen Minnie looking out of a window? 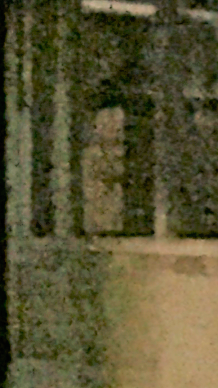 Minnie Mann loved her time living on Cockatoo Island so much... that she has decided to remain there.